THINGS TO DO, VISITOR TIPS 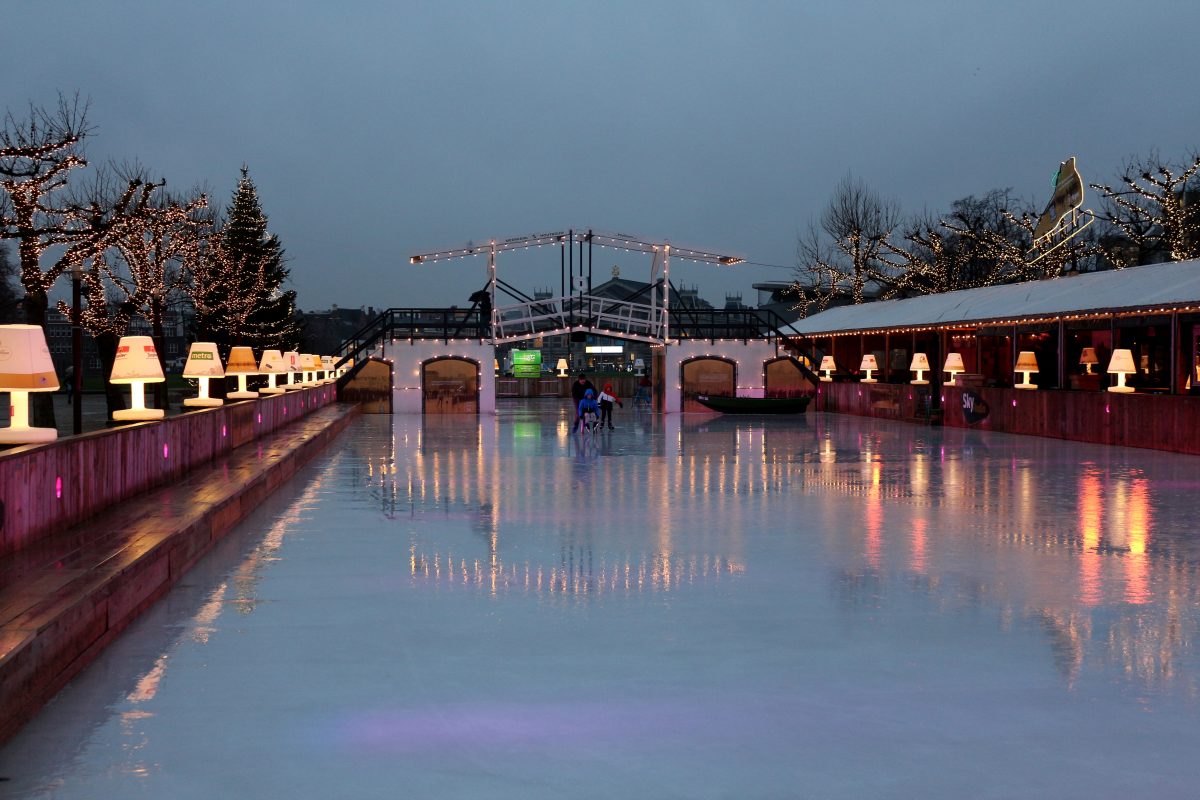 Ice skating is a wonderful wintertime activity in Amsterdam. Locals hope for super cold weather to freeze the canals for a really special Amsterdam ice skating experience. That doesn’t happen too often but luckily there are ice skating rinks in Amsterdam where you can still strap on your skates for a spin on the ice. 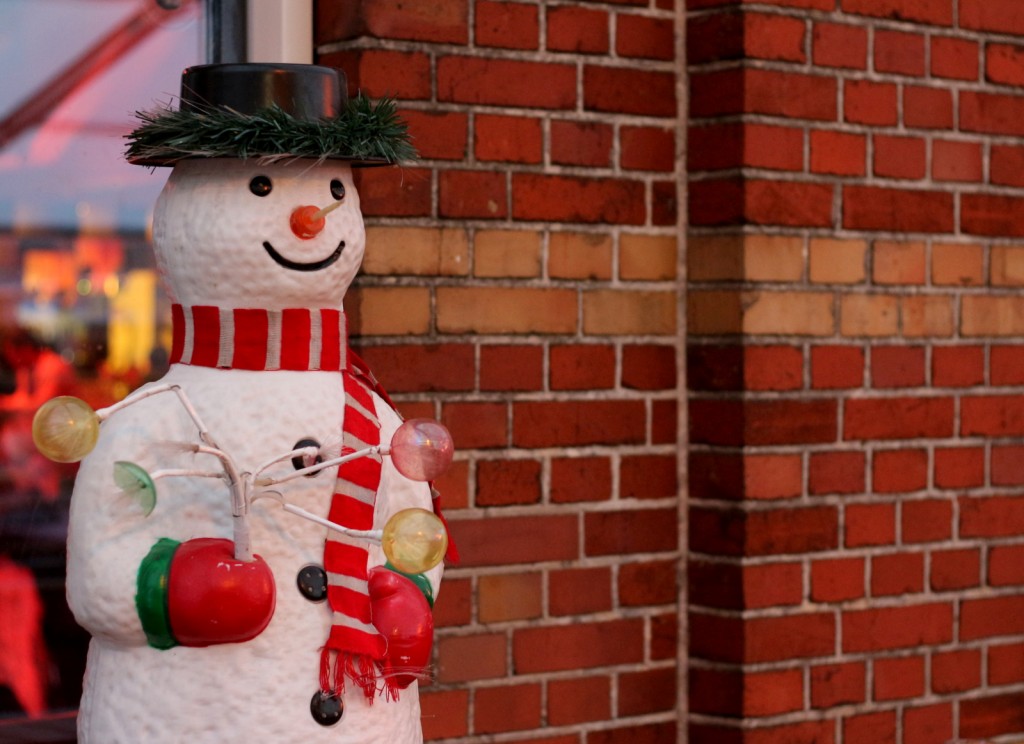 One of the most picturesque places to put on your skates in Amsterdam, the ice skating rink at Museumplein comes complete with a small replica of the Magere Brug and a view of the Rijksmuseum. Check the website of Ice*Amsterdam for more information about special events and activities.

You can grab a snack at the concession stand near the skating rink or take a look at our list of favorite places to drink or dine around Museumplein. 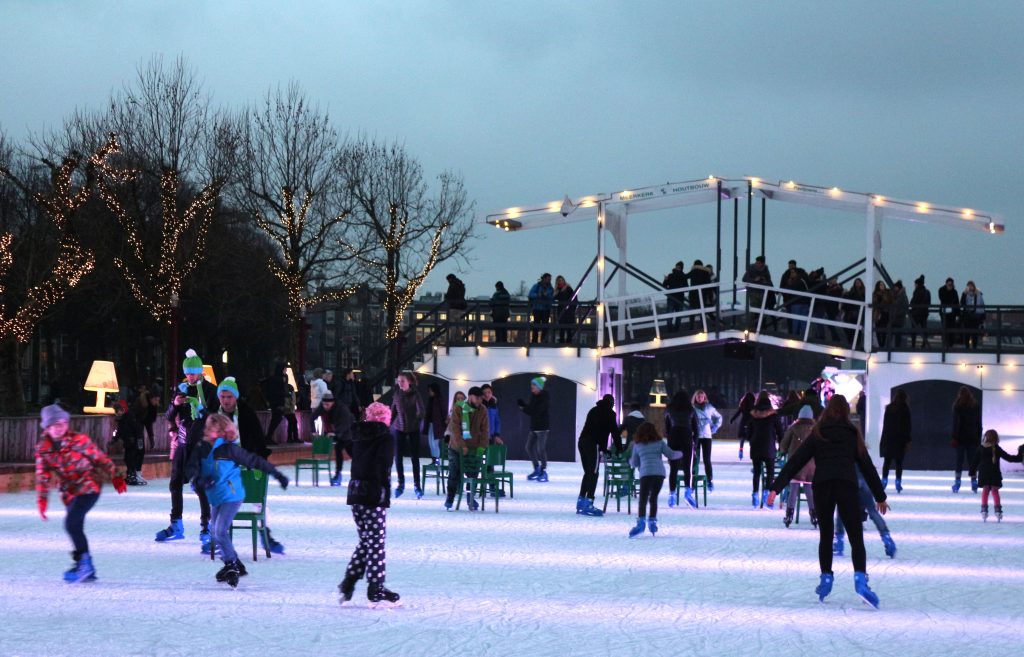 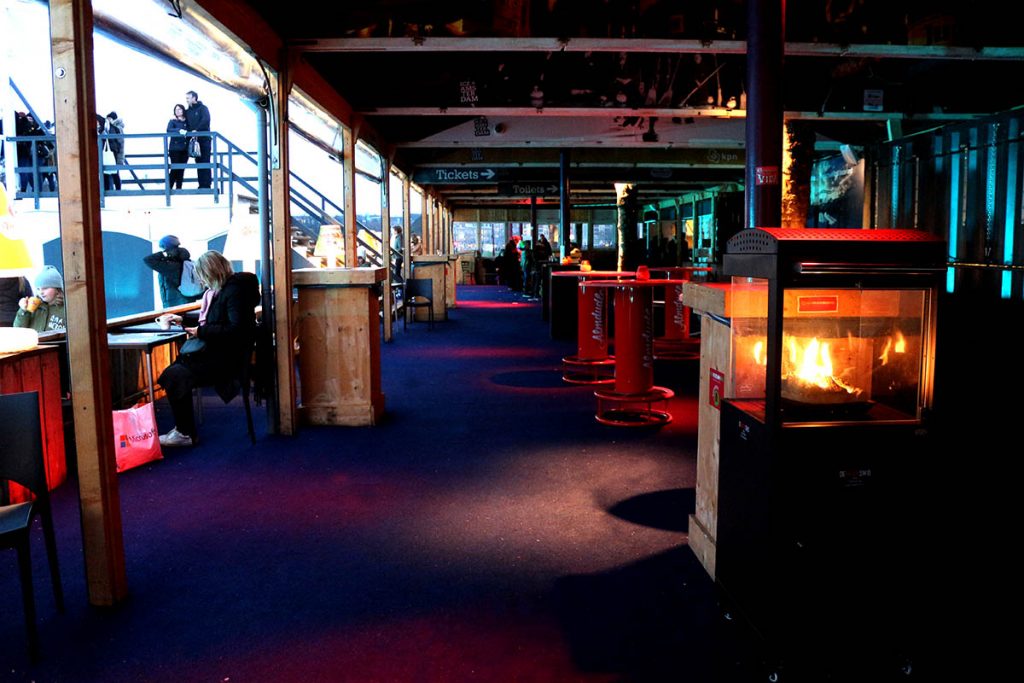 This oval ice skating arena in Amsterdam Oost might not have the picturesque backdrop of the Rijksmusuem but it is home to the Amstel Tijgers ice hockey team. At Jaap Eden you can take skating classes for young and old or just have fun skating with friends and family. 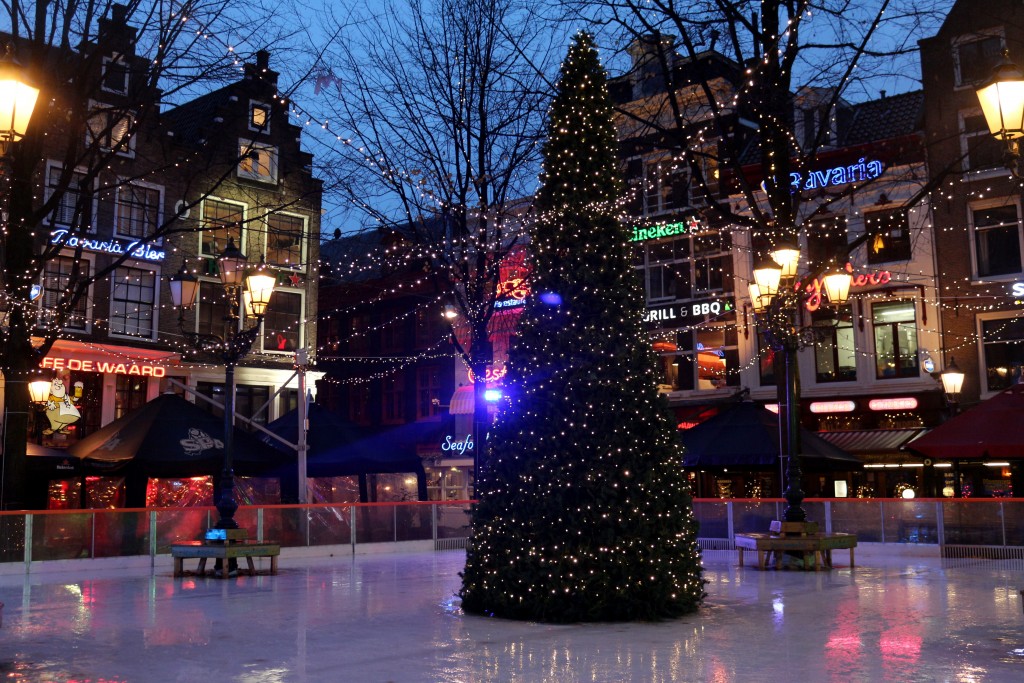 Ice skating rink in the middle of Leidseplein. This year this rink will be at Rembrandtplein instead.

The small and cozy ice rink will be set up at Rembrandtplein from December 6th, 2017 through January 8th, 2018. A cheesy but charming Christmas market is set up around it where you can have gluhwijn and other beverages. You’ll also find stands with wintertime treats like poffertjes and oliebollen to sustain you. Have you sampled these Dutch delicacies? 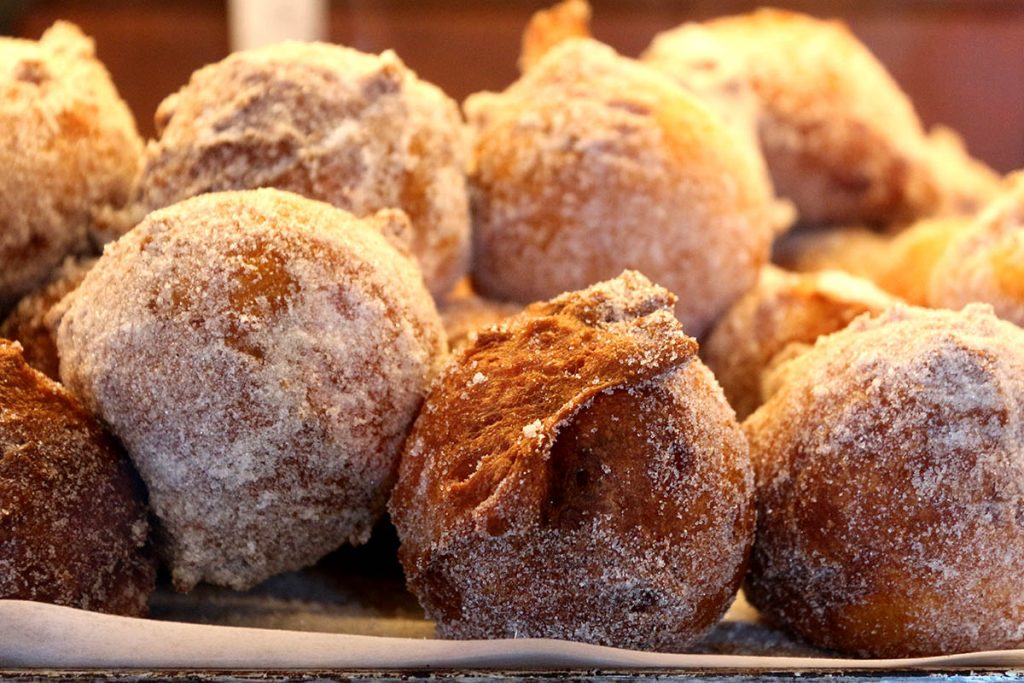 Once the other skating rinks close for the season, you’ll find the Coolste Baan van Nederland at the Olympic Stadium! Open from January 18th until February 28th, 2018. And you’ll even find Loetje On Ice, where you can dine on delicious meals from Amsterdam’s favorite steakhouse after working up an appetite on the ice.

OK you say, all these skating rinks are nice. But you might be wondering – when do Amsterdam canals freeze?

Well, they say we need at least 3 days and 3 nights below 0 for Amsterdam canals to freeze over. And even then you’ll need a few more days for them to freeze enough for people to be able to walk and skate on them. The last time Amsterdam’s canals froze enough to skate on was 2012. It was magical! And really really really cold.

In 2012 when the Amsterdam canals froze, there was an awesome concert on the canal in front of the Pulitzer hotel and these lovely ladies were skating to the music. Yes, actually on the canal, like the musicians and the crowd (and I) were all standing on the ice of the Prinsengracht! Crazy! Check it out.

Do you have another favorite ice skating Amsterdam location? Let us know!

WHAT TO DO IN AMSTERDAM IN WINTER TIME

Wintertime is a terrific season to be in Amsterdam. Be sure to check out the holiday lights and the Amsterdam Light Festival. Take a break at a cafe with a friendly fireplace and our favorite cozy bars. Check our agenda too for information about what is on in town!

Looking for more ideas for a wintery Amsterdam City Break? Check out this post on Eurostar.com.

Curious about Amsterdam weather in wintertime? Amsterdam is wonderful all year round but some months are rainier and colder than others. Stay warm and enjoy! 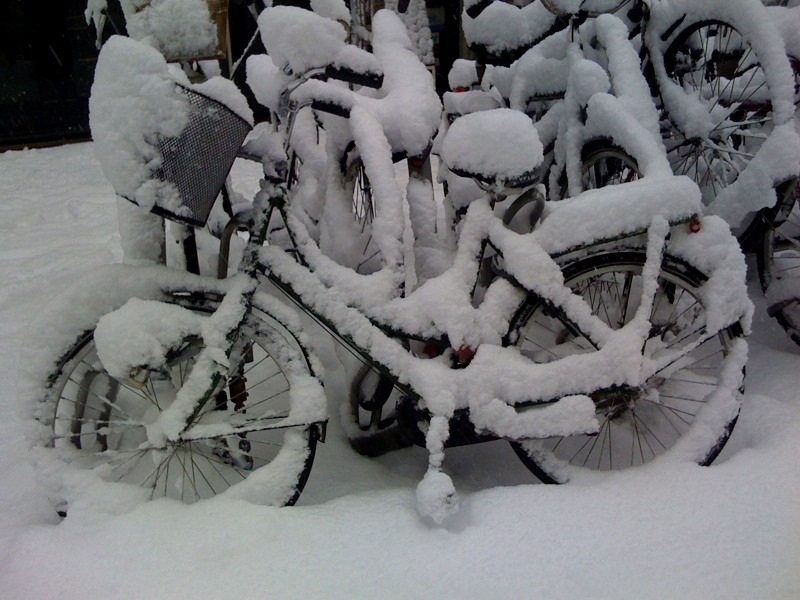 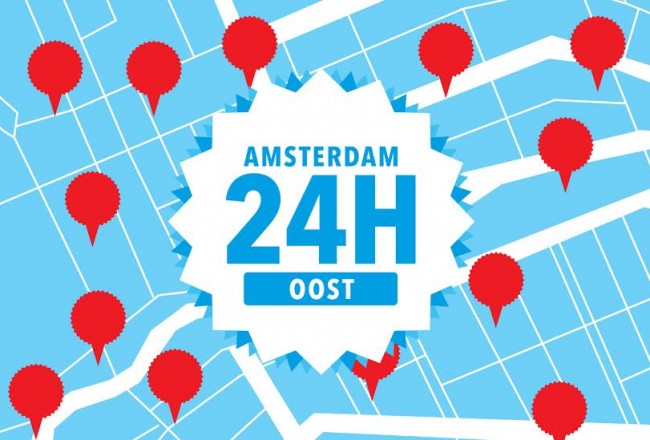 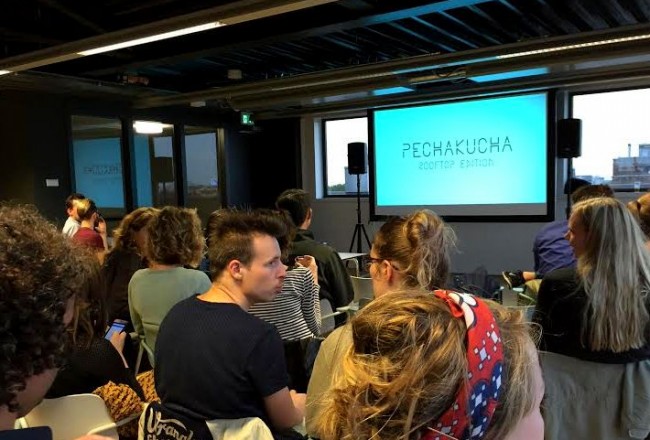 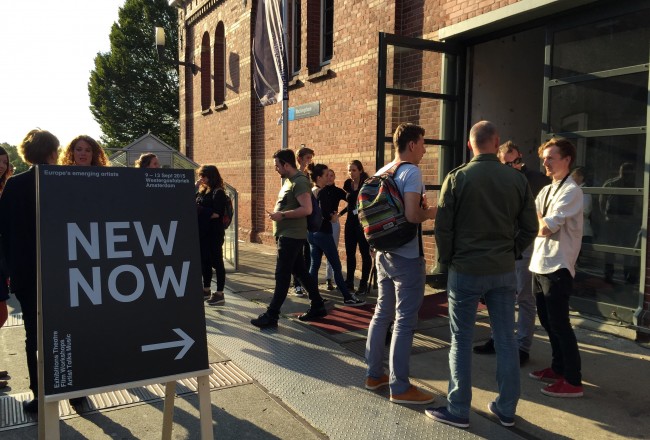