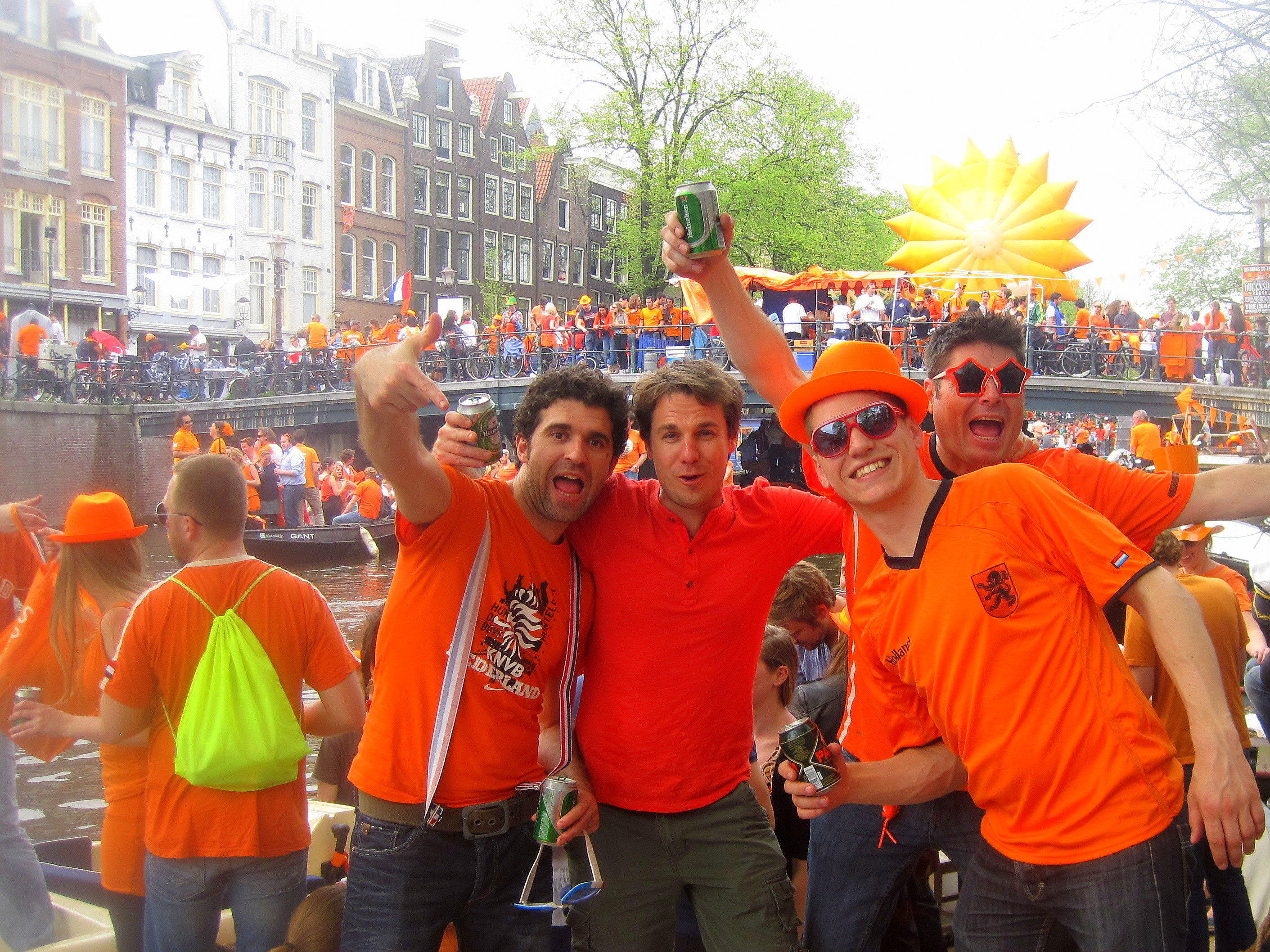 Let’s throw the King an awesome party this Kongingsdag!King Willem-Alexander is a fun-loving fellow who appreciates a good party. In fact did you know one of his former nicknames was Prins Pils?

There are many ways to celebrate this day, but most involve dressing in head to toe orange and partying with friends and family. Here are some of our tips for enjoying the fun in 2016!

King’s Day really gets started the night before on the 26th, called Koningsnacht or King’s Night. This is a great time to meet up with your friends at a bar or club in the center of Amsterdam or at a house party to drink and dance the night away!

This year there are lots of concerts and events for King’s Night. Check out this list (list coming soon!) for parties around the city.

But don’t get too drunk or stay out too late, you want to save some energy for tomorrow. 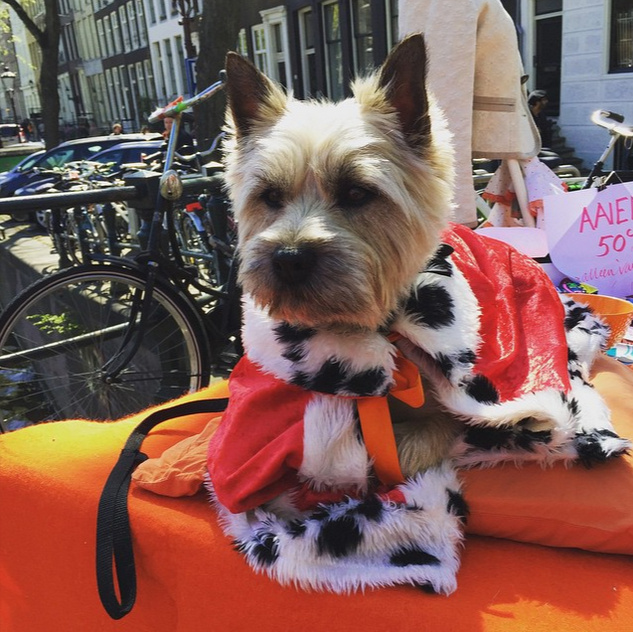 The biggest garage sale in the world takes place on King’s Day with the Vrijmarkt or ‘Free Market’ all over the city. Anyone can set up a little spot and sell their used clothing, household goods, books and bicycle parts. There is even a special children’s market in Vondelpark with kids selling stuff as well as food and entertainment. If you have kids, also check out the events at Westerpark.

People mark out their little selling area on the streets some days ahead with tape or chalk, and sit in that square all day starting early in the morning. If you love bargains be sure to check out these sales! Check out this link for more info on the Vrijmarkt.

Take a look at this map for the official Vrijmarkt areas around the city including Vondelpark, Mercatorplein, Westerpark and Waterlooplein. 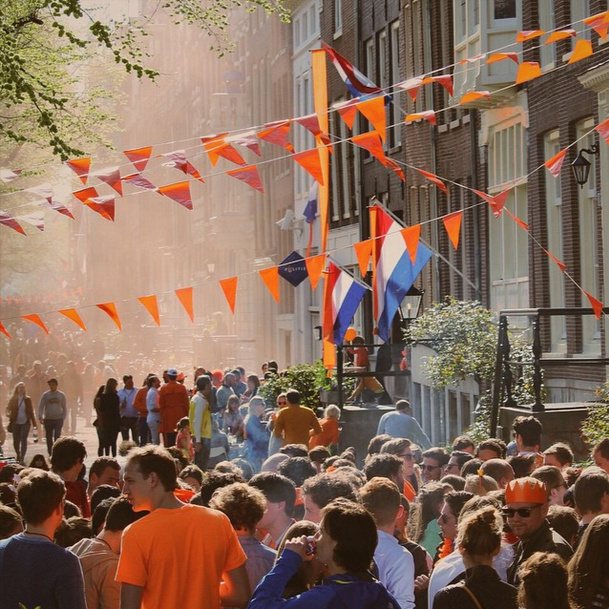 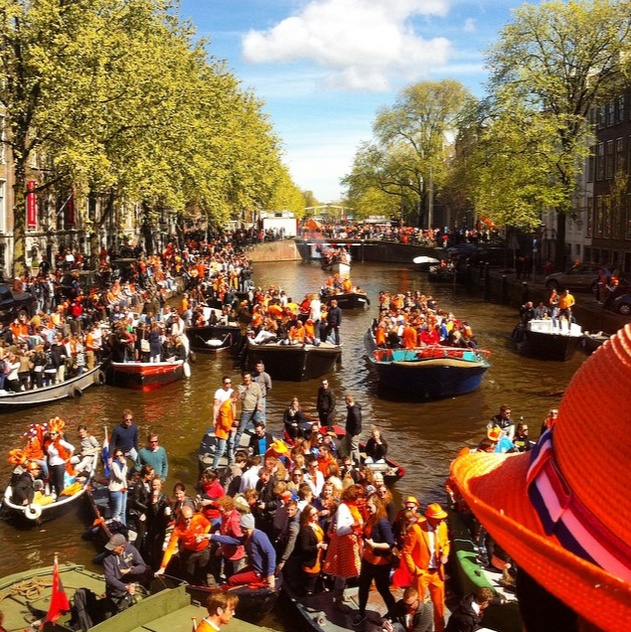 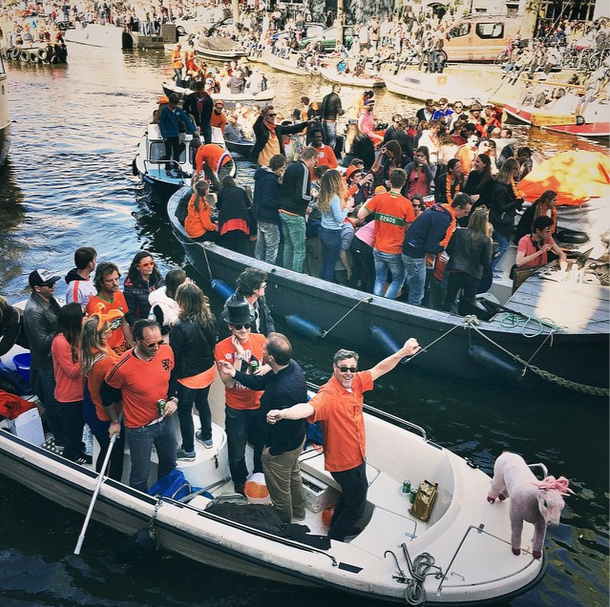 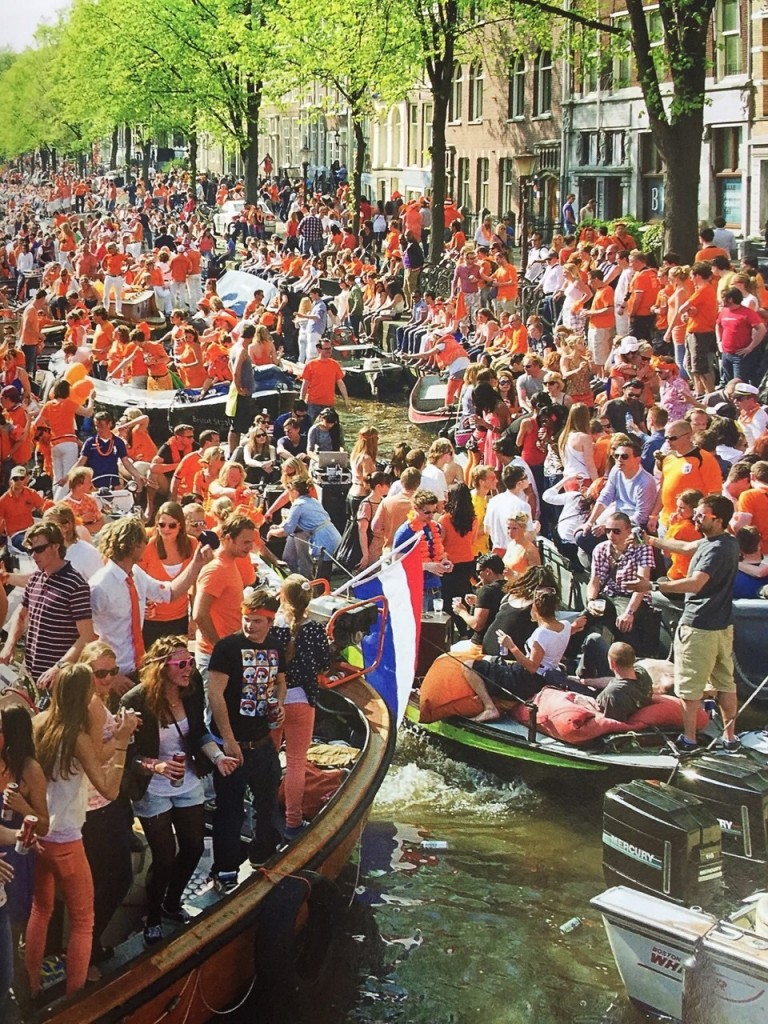 As you may know, Koningsdag celebrates the “birthday” of the King. Previously Queen’s Day was celebrated on April 30th which is actually not Queen Beatrix’s birthday, but rather that of her mother Juliana. From 2015 onwards, King’s Day will be celebrated on 27 April, the birthday of King Willem-Alexander.

No matter the confusing changes in dates and royals, it is still the perfect day to celebrate being Dutch or just show your love of the Netherlands and the color orange. And this year it is the day to welcome in the new King!

People pour into the streets and canals all over the city in their orange garb, partying in bars, on the streets and in boats. In fact, the canals can get so crowded that it might be possible to walk across the water by hopping from boat to boat.

There is nothing like the sea of orange that fills the beautiful canals of Amsterdam on Koninginnedag, now Koningsdag! If you know someone with a boat this is a great way to experience King’s Day. Or just catch a view from the streets and bridges along Prinsengracht, Keizersgracht, Herengracht, Singel or one of the smaller canals.

There are also stages for live music set up all around the city, and revelers can drink beer and dance in the streets. In past years there have been huge gatherings at Museumplein and Rembrandtplein, but now those big concerts have been relocated outside the center to make the crowds more manageable.

Here are some places to catch a great party on Koningsdag 2015: (will be updated soon with 2016 parties!)

Check out this map for a visual guide to the Koningsdag dance parties. You’ll probably find us at one of these parties at NDSM in Amsterdam Noord!

As it gets extremely busy in Amsterdam on Koningsdag, it is good to plan ahead and be aware of some important details.

Getting Around on Koningsdag

If you are taking public transit on Koningsdag, know that it will be very, very crowded. The NS trains are operating on an Oranjedienstregeling (Orange timetable) on the 26th to the 27th. This means trains will be on a different schedule and may depart from different platforms than usual. Be sure to check the schedule online. Planners are also advising that it will be better to travel through the Amsterdam Zuid Station rather than Amsterdam Centraal. Depending on your plans, this may be closer to your destination (Vondelpark, Museumplein) as well.

The NS ticket machines will be busy, so it is best to buy your ticket in advance or use an OV-chipkaart.

Trams will also be on a different schedule and many trams will not operate at all, especially those through the center. Be sure to check out the special schedule at the GVB website.

The Metro has a normal schedule so you can try using it to get to the center. It may also be quite crowded though.

If you usually get around by bicycle, don’t count on it within the center. The streets are crammed with people and it is impossible to get through by bicycle (and even difficult on foot at times). Plan to leave your bicycle somewhere outside of the center and walk to your destination. 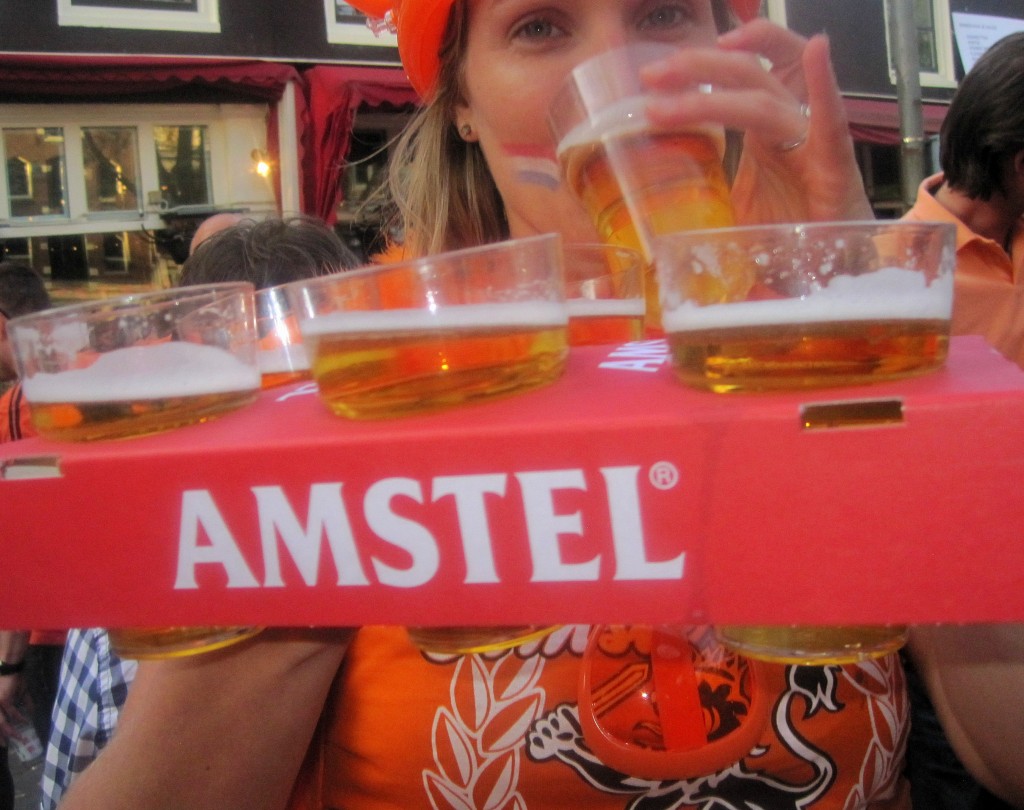 The city is trying to reduce the problems caused by alcohol on King’s Day. Therefore there is a limit to the number of drinks you are allowed to have in your possession at any one time. You are only allowed to have one alcoholic beverage at a time in public spaces. Six-packs and kegs of beer are considered more than one drink and may be confiscated. Also keep in mind that alcohol is not allowed in trains and at train stations between 19:00 on 26 April and 07:00 on 27 April.

In the past few years there have also been restrictions on stores selling alcohol on Queen’s (Kings) Day. Supermarkets and other stores in the center of Amsterdam have agreed that customers will only be able to buy one alcoholic beverage per person. Most stores in the center are closed anyway, but we advise you to stock up ahead of time if you are planning a party. On regular sunny weekends sometimes Albert Heijn runs out of beer, so get there early to be sure there is beer left for you!

If you are not partying at a bar, club, or friend’s house, where can you go pee after drinking all those biertjes? Check out this handy map at Urinwaar to find the public facilities near you on King’s Day. If you are on a boat there are also handy dandy pee spots called the “Plasboot” where you can dock for a quick restroom break. Be sure to carry change as some of the restrooms are not free.

Getting Money on Koningsdag

As bank machines usually have very long queues on Koningsdag, try to get enough cash a few days before. Sometimes the machines also run out of money.

We hope you enjoy Koningsdag and de Oranjegekte! 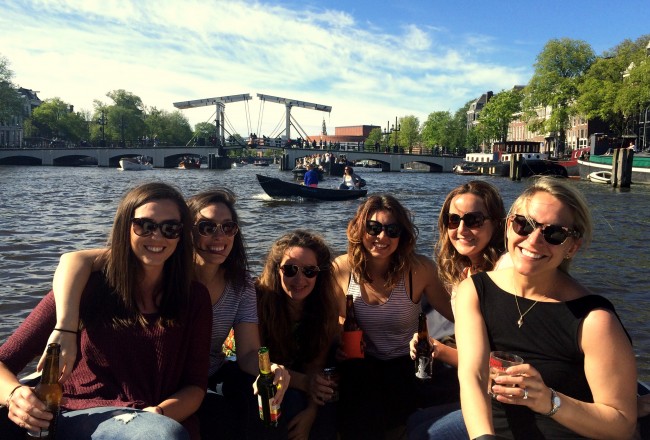 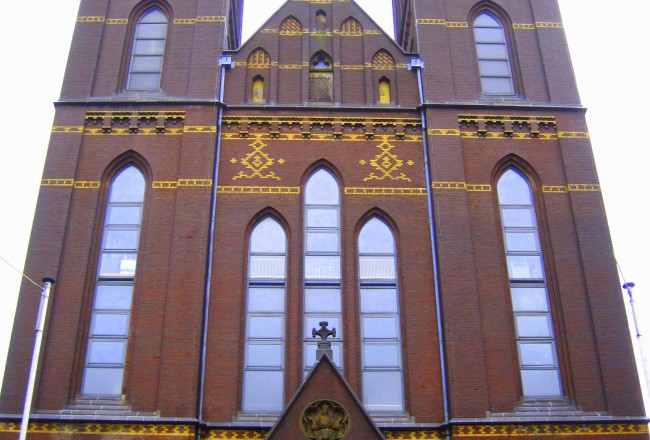 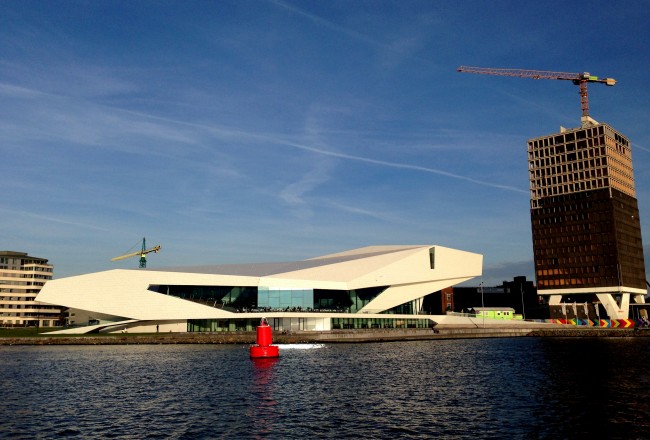