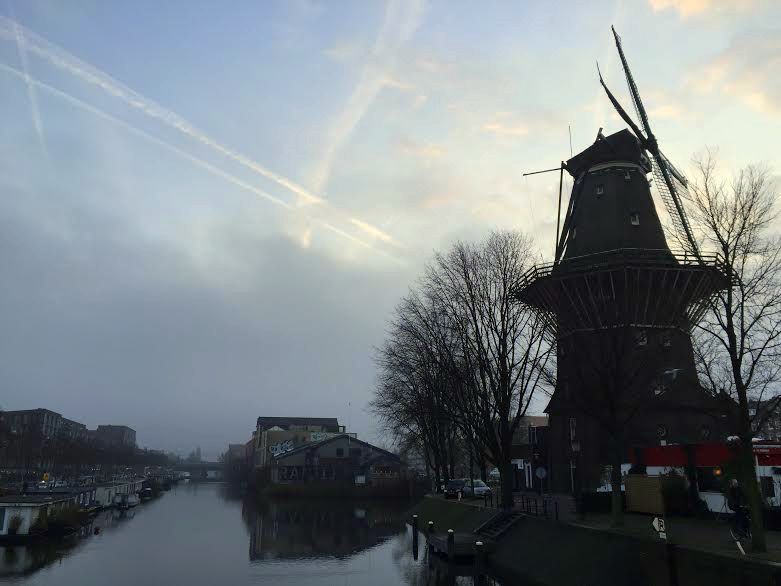 There are eight surviving windmills in Amsterdam. Visiting these lovely pieces of Dutch history is a great way to see many areas of the city.

Some of these Amsterdam windmills are not open to the public but all of them can be viewed from the outside. Read on for more information about the windmills in Amsterdam.

De Krijtmolen d’Admiraal is named after Elizabeth Admiral and was completed in 1792. “Krijtmolen” means chalk mill and this windmill in Amsterdam Noord was used for grinding stones like chalk, tufa and limestone. The stones were first dried in two barns and then brought to the mill for grinding by two large granite wheels. d’Admiral is not only a krijtmolen but also a trasmolen used to grind other types of stone to make masonry products like bricks, mortar and roof tiles.

Would you like to visit De Krijtmolen? You can! Every second Saturday of the month the Amsterdam windmill is open to the public. It is also possible to rent out the hall adjacent to De Krijtmolen for special events. 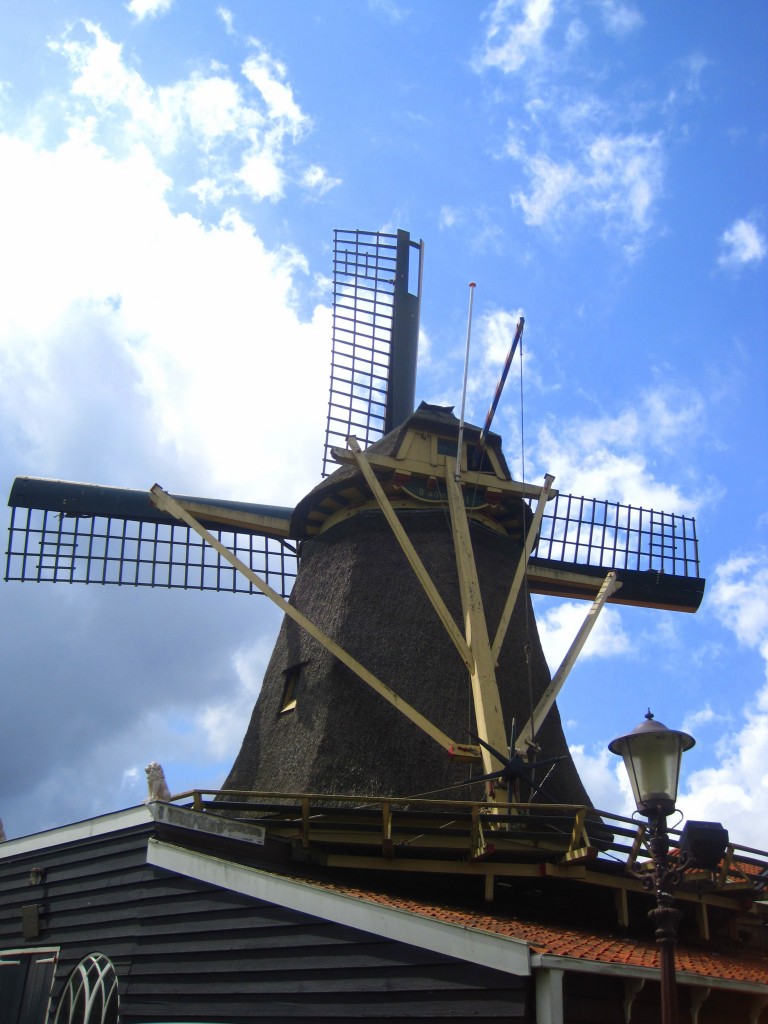 One of the most well-known windmills in Amsterdam is De Gooyer. Why is this one more famous than the others? Probably because it sits next to Brouwerij ‘t IJ, one of Amsterdam’s most popular local breweries. The windmill and the brewery share nothing but the location, however the big wooden mill does make for a useful landmark when finding the brewery.

De Gooyer is the tallest wooden mill in the Netherlands and is named after the two original owners who were from Gooiland. This Amsterdam windmill is also known as De Funenmolen due to its location on Funenkade and Zeeburgerstraat in Amsterdam Oost.

The mill was used for grinding grain, but is unfortunately no longer in use since it was damaged in 1972. De Gooyer is the last of 26 korenmolens that were located along the 17th century walls of Amsterdam. It is not possible to visit the inside of this windmill, however you can check it out from the outside with a nice craft beer in hand! 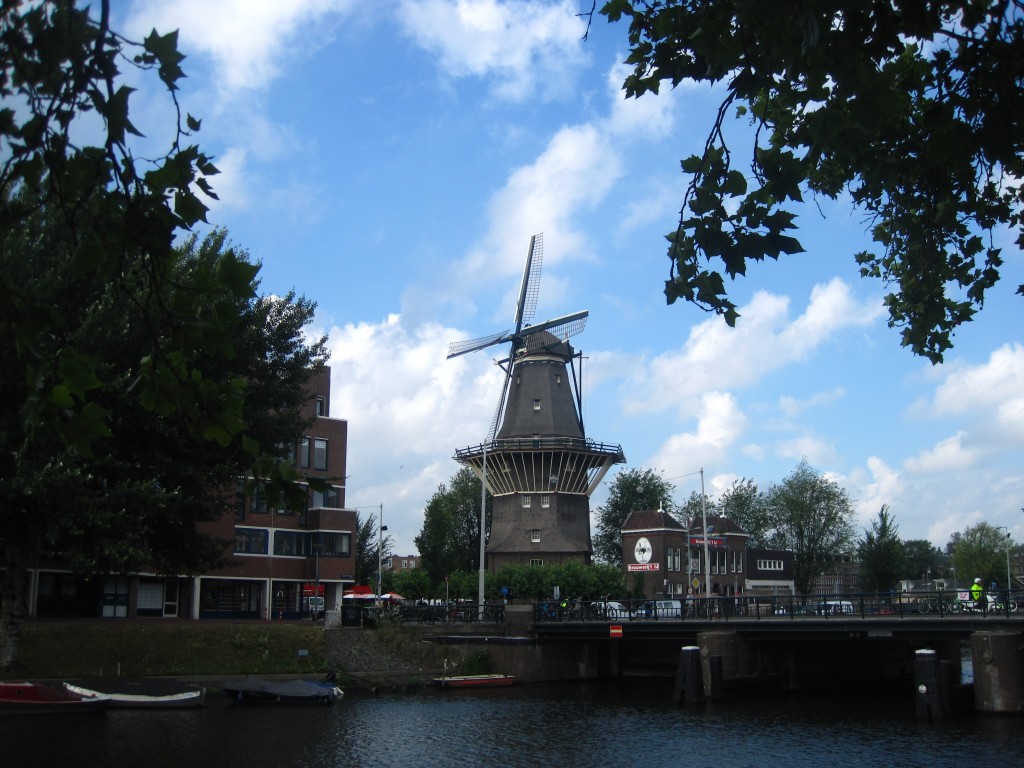 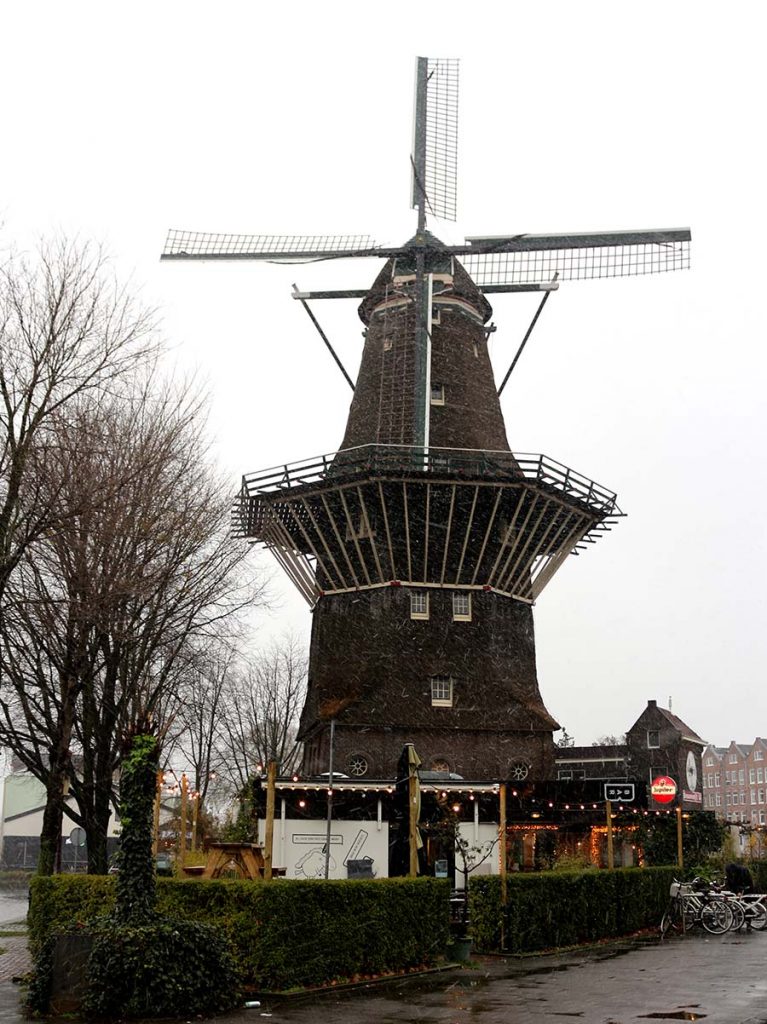 De Gooyer in the wet snow

The 1200 Roe is a poldermolen in Amsterdam West on the the Haarlemmerweg. Poldermolens are used to pump water from the ground and drain the land for farming or housing. Although De 1200 Roe has been restored it is currently not functional.

You cannot visit De 1200 Roe as someone currently occupies the windmill. However you can see the windmill from Haarlemmerweg. It makes for a lovely landmark when cycling along Het Brettenpad.

Did you know that the name of the mill is based on the distance to the Haarlemmerpoort at Haarlemmerplein? A roede is a measure of length and 1200 roeden is about 4.5 kilometers. 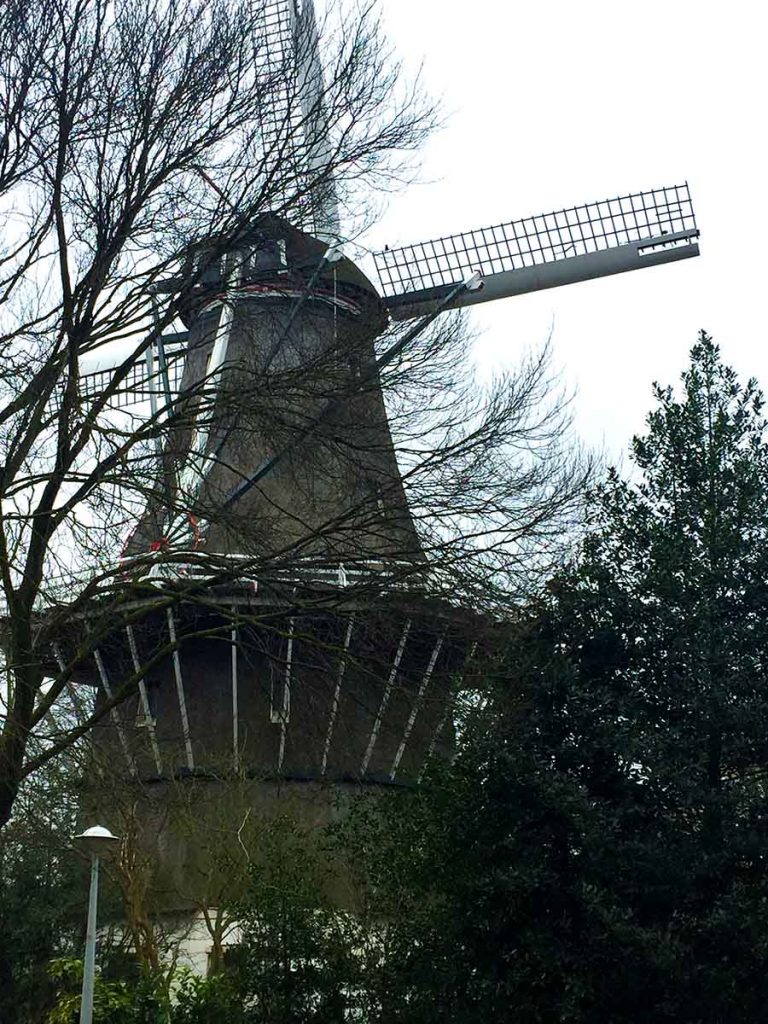 Molen de Bloem also sits on the Haarlemmerweg near the west end of Westerpark and is also known as 400 Roe for its distance to Haarlemmerpoort. This mill dates from the 1780s and originally stood at the end of the Bloemgracht in the Jordaan. In 1877 the mill was removed and rebuilt at Haarlemmerweg.

Molen de Bloem was a flour mill and is now used as an office space. The Amsterdam windmill still functions and it is sometimes possible to view the inside on special days like Nationale Molendag. 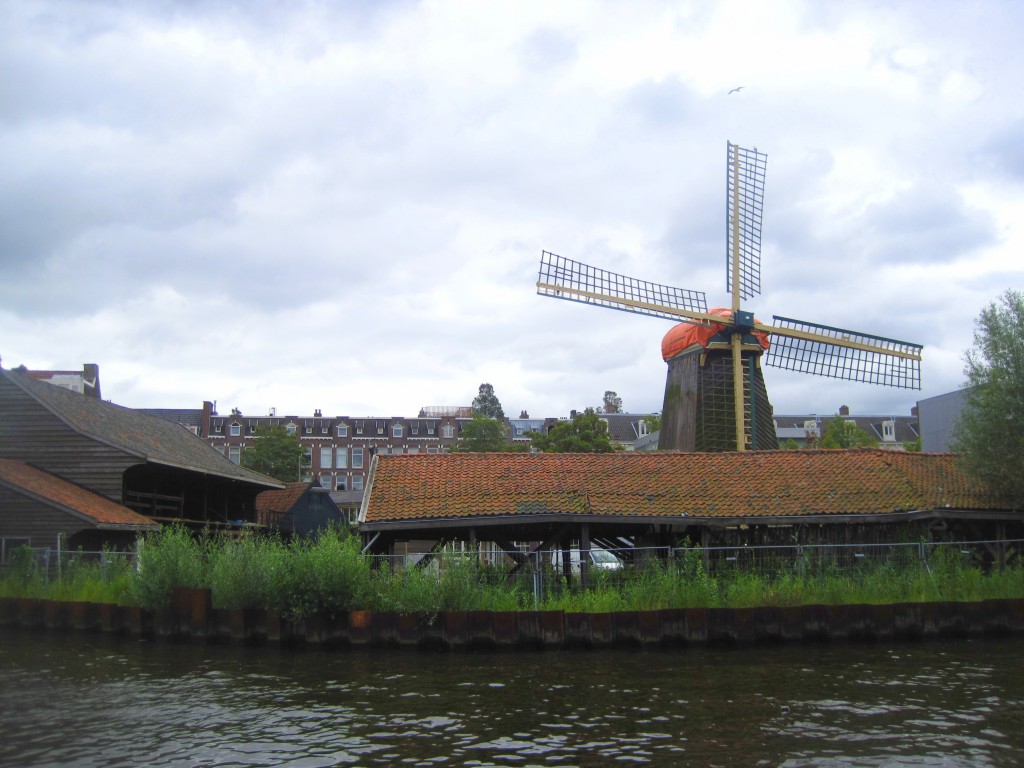 Molen de Otter is a paltrokmolen, and was built in the early 1600s. It is the only remaining sawmill in Amsterdam and last operated as a working mill in 1925. In the late 1990s De Otter was restored to functionality but the winds in the area were weak due to all the new building construction. It was proposed that the windmill be moved to Uitgeest so that it could function, but the city council opposed the idea as De Otter is a city monument.

De Molen cannot be visited at this time but can be easily seen from the road. It sits right on the Kostverlorenkade in Amsterdam West.

This poldermolen was originally located in Sloten but was moved to the Amstel River in 1956 due to the expansion of the Nieuwe Meer. The new location of De Riekermolen is along the route to Ouderkerk aan de Amstel, a lovely day trip from Amsterdam. There is a statue of Rembrandt beneath the windmill, as Rembrandt made many drawings in this area.

De Riekermolen is not functional and cannot be toured but does still spin when the wind is right on the weekends from May to September.

Molen van Sloten is a functioning poldermolen and can be visited daily where volunteers will explain the workings of the windmill. This Amsterdam windmill is located on the outskirts of the city, and is adjacent to a museum where you can see how barrels are made. Although the windmill and museum are on the edge of the city, they can be reached by public transport and the buildings are handicapped accessible.

The one windmill in Amsterdam that no longer has its blades is De Oudemolen. There is now a coffee and tea cafe located in the former poldermolen. 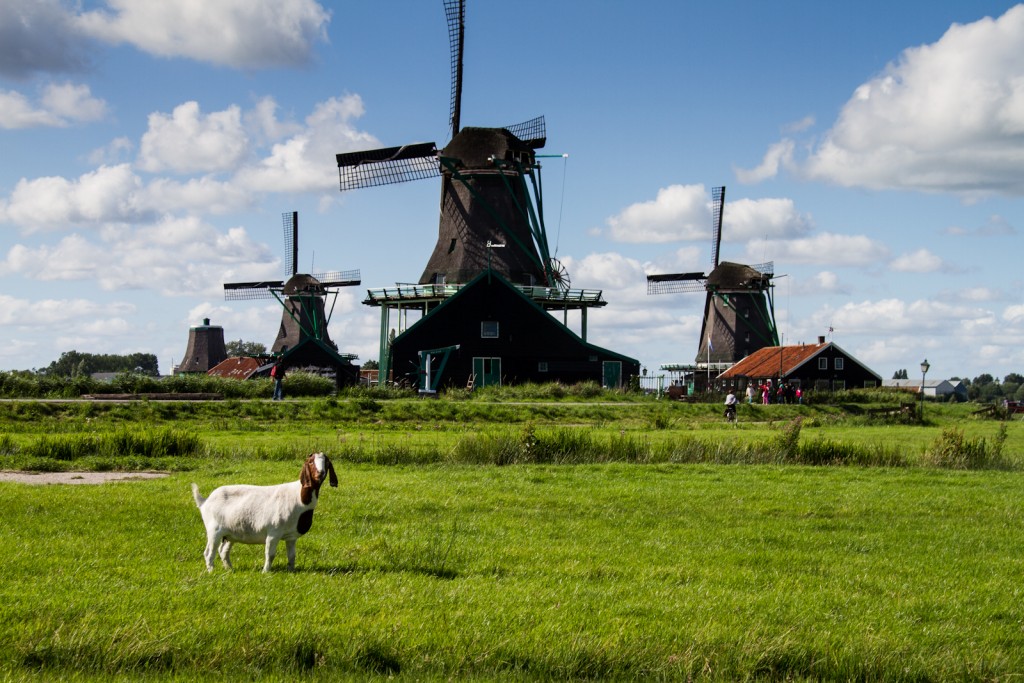 Other interesting windmills near Amsterdam include Twiskemolen north of Amsterdam at the entrance to Het Twiske, De Adriaan in Haarlem and of course those at Zaanse Schans. They are definitely worth a visit for fans of windmills. 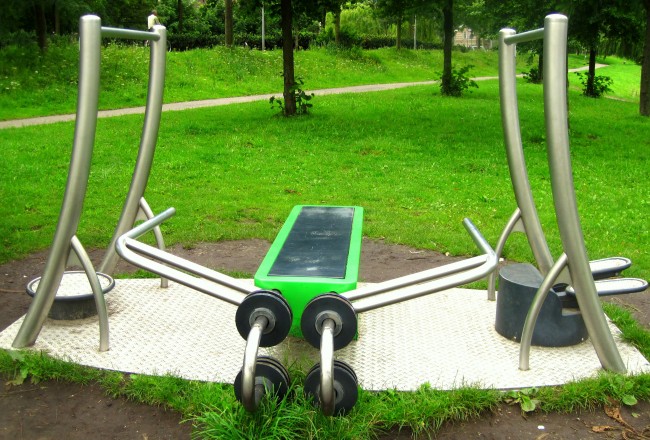 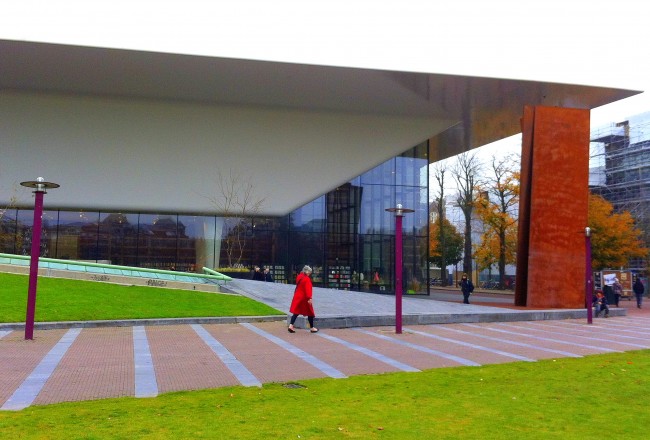 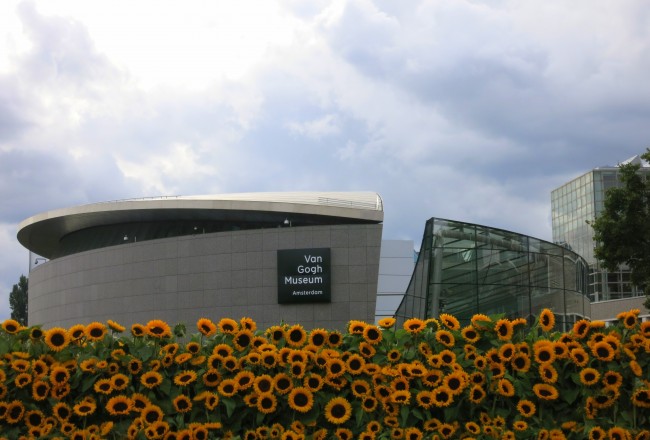